There is a pair of gibbons on the back of Singapore 50 dollars note.  The gibbons are there not only to beautify the note but they also signify a great artist who contributed his entire whole life to the art world.

陈文希, Chen Wen Hsi, was born in China, Guangdong province.  He migrated to Singapore in 1948 and passed on in 1992.  He loves art and nature at a young age.  He grown up in a suburb village and was taught by renowned artists like Pan Tianshou in Xinhua College of Arts in Shanghai, China.

Chen was proficient both in traditional Chinese ink paint and western oil paint.  He focuses in observing the behavior of nature and animals.  The subject varies from landscapes, figures, birds to animals.  He has a penchant for gibbons and owned 6 of them.  One white, one gray and four black ones.  These beautiful animals gave him the opportunities to study the creature’s postures and its characteristics. 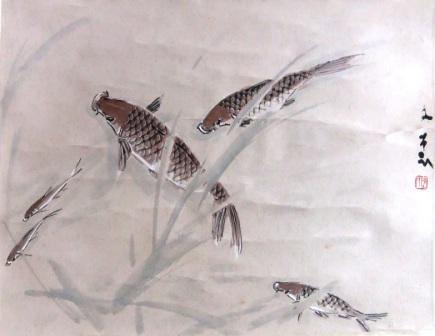 In 1975, Chen was conferred an honorary degree of Doctor of Letters by the then-Chancellor of the University of Singapore and the then-President of Singapore, Mr Benjamin Sheares.  He earned many more titles like Public Service Star; Cultural & Communications Award just to name a few. 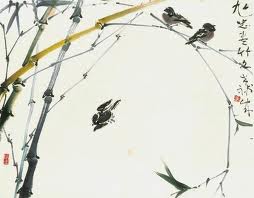 Chen was also a perfectionist to his own art works.  While he was insistant to leave the best on earth, he burnt away paintings he deemed not up to his standard.  A rigorous artist, he woke up early in the morning at 6am to do his paintings without a skip for many decades.

So the next time, if you happen to hold on to a Singapore 50 dollars note, just spare some time to say hello to these gibbons and the great artist before you pass it on to another!

I love this artists work. How wonderful that it is on a bank note. I love those fish – just lovely.

Thank you – I never knew about this artist! Remarkable!!

You are welcome! Is good to know him! Thanks for reading! 🙂

Hi! I love your blog and have awarded you the Very Inspiring Blogger Award! Check it out:
http://lasesana.wordpress.com/2013/02/19/very-inspiring-blogger-award-thanks-tuttacronaca/

Thanks, Lasesana! Have a good day! 🙂

You too! Thanks! and congrats!

It’s amazing, really, how such care is taken with all currencies–and we only see its worth–not its true value, as this post showcases. Love those lil fellas, too!

Yes, truly ! If we can spend some time on tiny stuffs, you may find a larger world in it!
Thanks, Karen! Have a great day! 🙂

I’ve never seen Singaporean banknotes before! And i’ve never seen such refined artwork on notes! So beautiful thank you for sharing!

What beautiful paintings and to have one on a bank note – just lovely. I’ve never seen these bank notes either so thank you very much for showing them to us. 🙂

You are welcome!
If you are keen on 5 dollars note story, you can find it in my top 20 post, position near the last, quick, pick it up!
Before it disappear! Cheers! 🙂

wow.. this is nice info for me. I’ve never seen Singaporean banknotes. and now i have and know something about it

Hey! Another 5 dollars note story under top 20 posts. This is also a very interesting article on our country banknote.
This article is ranking around 18th now, pick it up before it disappear!
Thanks for reading!
Ryan, have a nice day! 🙂

The artwork really is amazing!

I owe you so much of appreciations!
Thank you, Rexlin! 🙂

I do love the gibbon pictures, so beautifully drawn. Nice bank notes !

You are always so encouraging!
Thank you! 🙂

The art has such a delicate beauty to it… it’s beautiful!! 😀

Sydney keep one for you! Hug! 🙂

I will to go back and check if I still have any Singapore 50 dollars! 😀

Spare one past it to me to confirm! Haha! 🙂

Very interesting! Those fish are so …real!

I always admire and respect artist, how talented they are! 🙂

That’s interesting! Never realize there are 2 monkeys on the S$50 note 😀

That was very interesting. I have never even seen a bank note from Singapore. The artist’s work in beautiful. Interesting to find out the meaning behind the flag as well. It’s very deep. Good principles.

Thanks for your reading and appreciation!
Have a good day! 🙂

Thank-you! And thank-you, you too…

Thank you, Sydney, I sooooo love these kinds of works!!!!!!

Thank you! Unfortunately, he has pass away, if not I can for teaching me! 🙂