25) Glimpse of a Snake in Chinatown

A night scene with a wave of square lanterns appear in Chinatown, Singapore which was captured my me this evening.  As this is the Lunar year of Water Snake, I guess that’s why the lightened up decorations come conversely with fire red colour.  To me, the deco resembles more like Loch Ness  than snake, most probably they belong to the same species.  Or I might be wrong.. 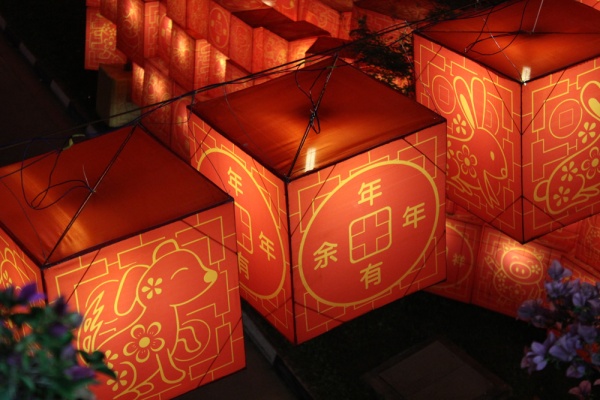 The illuminated boxes come with twelve zodiac and auspicious words on them.  May all my wishes be fulfilled with the dedicated inscriptions, I wish! 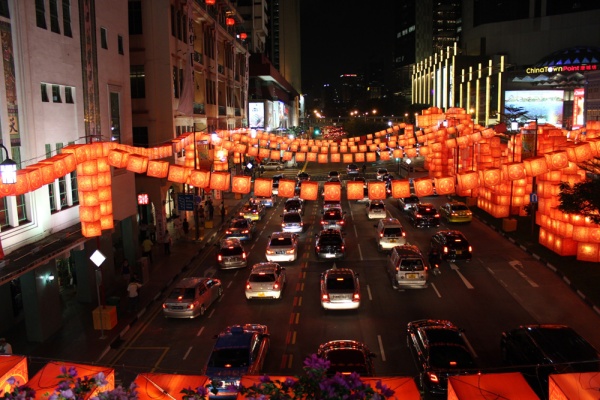 Coincidentally, the red break-lights of vehicles match so well with the festive atmosphere.

The much sought after and infamous dried sausages and dried duck legs (also known as wax sausages/duck legs) store give an extra touch to the New Year’s air.

A good technique in bargaining might earned you an extra sausage of joy!

An elder earning his own keeps with his talent earned my appreciation of some dollar notes. 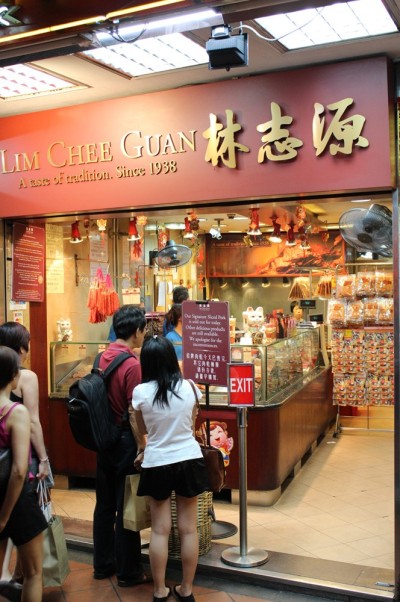 Lim Chee Guan, the well-known BBQ sweet pork shop has been working non-stop day and night through weeks to cater to the long waited customers.  Waiting time can be as long as 2-3hours if you have the patience to wait for it.  When you see this, you know, the festive seasons is just at the corner!

A lovely journey in Red. Such a well kept city! And you know, I’m a snake…how can I tell if I am a water snake?

you are so sweet, Sydney! And–as a woman–I’ll prolly keep quiet about which one “fits”. It isn’t the water one, that’s for sure! LOL…Thank you, Ess! I will always remember. 🙂

What beautiful photos — especially the second one, with the red lanterns. What are the dates of Chinese New Year this year?I want to celebrate in Chicago.

And Ryan, if you celebrate that day, others might be on the road already! Have fun early! 🙂

In Indonesia it will be on 17th Feb.
one day only.

o, I apologize for my ignorant! That’s why I like Blogging, full of information and knowledge!
Thanks, Ryan! Enjoy you day! 🙂

it’s okay.
I like blogging for that also. Have a great day Sydney

Sara, is 10th Feb. The reunion is always on the eve, which is 9th Feb.
Do Chicago celebrates Lunar Chinese New Year? 🙂

Thanks Sydney. Yes, some do, they go to Chinatown. There might be a parade in Chinatown too, if I recall correctly…unless it’s in the summer for another Chinese holiday.

I was very impressed by the Singapore Chinese New Year market when I went there three years ago. Hope you’ll post more about it. Thanks.

Sure! let me look for my Rattan basket 1st, I’ll be back soon! 🙂

I wish I could walk write by you, to experience all that you see! Marvelous job.

I have a few Blogger spiritually staying next to me, you are one of them!
Linda, you are always my senior, my respectable person!
Have a good day! 🙂

Wow it’s beautiful there! Yeah the new year is coming 🙂 So excited for that!

I was just happen to be a passer by there yesterday night. Those deco compare to previous year which a bit lost out !
But this year is a different year for me as when I walk along I feel like I am talking and showing to you all face to face.
Thanks to WordPress and Jamie and all my Blogger friends!
Is my honor to know you guys!

Great photo’s, loved the colors and illumination. Are you ready for Chinese New Year? I’m looking forward to all the festivities in this local area.

Frankly, I’m a man with simple living and moderate pace! I go for quality hour with friends and family.
I don’t believe with a good food and enjoyment can last a longer memories!
But with moderate foods and chit chatting is fine.
I focus New Year and reunion day on feel and the bond.
That’s why my deco are little but warm ( you will see in my future coming post), foods just last me for a few treat.
If you ask me whether I am really, I can firmly answer you, Yes! Because I got not much things to prepare! Haha! 🙂

Thank you for the journey. 🙂

Lily, you are welcome! 🙂

Have not gone down to Chinatown yet – plan to do so this weekend to soak in the atmosphere.

Hi Eric! Nice to meet you! this weekend might be a bit heat up there, but that is the fun right?
Have a great day! I see you around! 🙂

Rexlin, I took the shot when I was on the pedestrian over head bridge. A few lover couples was sitting next to me!
I managed to shoot and go without interfering their romance tales! Haha! Sometime I feel like I’m a fun maker! 🙂

An extra sausage of joy…that would be nice I guess. But this was a nice post, no question 🙂

All of the colors and shapes are so unique and beautiful…. Love it! 😀

Until now, I still can’t get over the Loch Ness snake! Haha! 🙂

Thank you for sharing this. Your pictures are terrific!

Thank you Canon EOS!
And thank you, kristin!
Have a wonderful day! 🙂

Lovely to see these pictures. Thank you. I visited on Saturday night and it was such a crush I couldn’t take any photos. Just leaving Singapore now after a wonderful week – a fascinating city, as your blog attests. Warm wishes for the New Year! Linda

Hope to you see back Singapore, if not, come over My Blog, I can show you around the different perspective of Singapore!
You take care, have a smooth journey home! 🙂

Your photos show me a warm and lightful atmosphere .Great shots.

Hey, thanks! You are always so supportive and encouraging!
Have a warm day! 🙂

Lovely photos, I especially like the red lanterns – very festive. I have always wanted to see Singapore, I think it is because of the lovely sound of the name! You are right when you commented about the internet and blogging, we learn so much. I am enjoying learning about your beautiful country through your photos. Blessings – Patty

Singapore has a lot of area needs to improve. What I show case you is just the tip of the iceberg!
Many more to come, But it wouldn’t be 5 star hotels or high class F&B, that is for sure!
I leave it to someone else to do it! Haha!
Thanks, Patty!
I wish you in good health and in peace in this coming CNY! Cheers!

Thank you Sydney, I wish also wish you good health and peace. I look forward to your pictures. We like to see the places that tourists don’t go, they are usually the most beautiful!

Yes! That will be my garden! 🙂

Sydney, these are wonderful photos, as yours always are! Thanks for helping me feel like I’m there 🙂 I especially like the ‘tail lights’ with the festive banners over the streets. And I am so touched and glad that you shared some dollars with that musical elder. I was wondering if there are more than one list about the element that goes with the sign, because I am a 1965 Snake and I have always read that the element for my year is WOOD. I was just going to comment to wish you a Happy New Year and welcome to the year of the Snake, but your reply to Charron has made me curious so I wanted to ask this as well 🙂 Thanks, Gina

Hi Gina, I have double check with the 通书 ( A Encyclopedia past down from Chew dynasty in China) , it stated clearly 1965 – 乙巳 year is come under “Fire” category.
Thank you for your clarification, or you can google “乙巳” they may give you the answer correctly, which I believe should be the same as mine!
Have a great day then! Cheers!

That is so nice of you Sydney 🙂 Thank you for your time, and I look forward to enjoying learning about the characteristics of Fire Snakes. Have a great day too!

I saw this snake last week, when I was in Singapore, haha.

Is a funny snake right? 🙂

Sydney, I so love your photo of the red lanterns up close. Is there any way I could include that picture in a blog post of mine, if I give you photo credit, and also mention your wonderful blog posts on Chinese New Year? -Sarah

Thank you so much, Sydney! I love everything you have written about Chinese New Year.

Thanks, blessed with love! 🙂

Sydney, absolutely gorgeous! Thank you for the lovely virtual tour!

You are most welcome!
Though CNY is over, but my wish is not over!
I wish you be Happy and Wealthy in 2013! Cheers! 🙂

Hi Sydney, My thanks go to you, for lending me the incredibly beautiful photo to tie in with my post on the color red.

Is okay, I thought I should thanks you in stead for mentioning my name in your post!
Any way, we thanks each other! 🙂

I love the rich reds in these photographs-what an amazing sight to see!

Chinese believes red can bring joy and prosperity to them!
That’s why you see red is everywhere! 🙂

I agree-red is a most energetic color. It can open up a world of possibilities!

What the meaningful phrase! 🙂