40) The two arms of The Fullerton Hotel 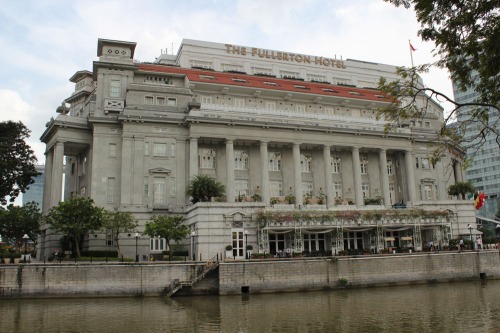 In my opinion, The Fullerton Hotel, from the direction of Victoria Theatre is a giant man standing in between two spreading arms with a warm cheering face!

Cavenagh Bridge, the right arm was built in 1870.  It is the oldest bridge existing in its original form on Singapore River.  It named after the last India-appointed Governor of the Straits Settlement, Major General William Orfeur Cavenagh.

The bridge was designed by John Turnbull Thomson, under supervision of Captain Charles Edward Faber, the Madras Engineer who have Mount Faber named after him.

Before the bridge was born, there was one shaky bridge connected the both sides.  Travelers just need to pay 1 cent for passing the bridge. 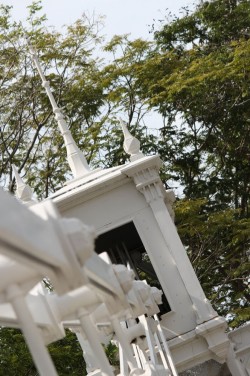 And now, Cavenagh Bridge is one of the Singapore bridges fav by lovers, after it overtook by Anderson Bridge due to overloading problem.

Anderson Bridge, the left arm was built in 1910.  Given a name after the Governor of the Straits Settlement and High Commissioner for the Federated Malay States, Sir John Anderson.

This beautiful steel arc shape structure was built intended to lighten the load of Cavenagh Bridge.  It is so far the last bridge built in steel along the Singapore River.

In the past, there is a belief that men and women tossing apples and oranges respectively into the River will be blessed with a happy marriage.

And for singles hurling oranges into the River will be blessed with a partner soon.

Not so sure if this belief is still concurrence, but the reverse effect may end you getting a fine for littering the River.

The Fullerton Hotel, glimpsed through steel arches and ribs.