I met a Kachang Puteh man outside Peace Centre along the main street.  “Kachang” in Malay means Bean and “Puteh” denotes color White, on the whole it means White Beans.

Kachang Puteh man was an immigrant who came from India during the 50s and 60s.  They are popular among the kids, cinema or amusement park patrons.

Life is a start from scratch.  They are self-reliance and sell beans for a living.  Besides selling beans and nuts, tidbits like prawn crackers, sweet candies are what they can offer too.

The beans varieties were mostly roasted, though some were steamed (like the chicks beans).  All beans in containers are neatly laid on the Kachang Puteh cart. The kachang are wrapped with thin paper folded in a cone-up shape.  In those days, it cost $0.05cents per cone but now I have to pay $1.00 for a cone! 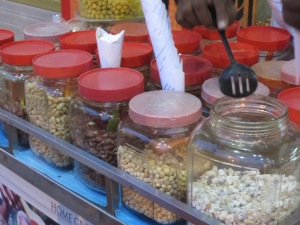 Personally, I have a penchant for the roasted variety which comes coated with a layer of sugar, though too much of it may cost the Tooth Fairy some works!

Kachang Puteh man usually lodged their carts outside cinemas or amusement parks.  In those days, cinemas and amusement parks are standalone buildings and it is easy to push the cart around and start a business.  Unlike now, cinemas are mostly “built-Ins” and run by building’s management.  Renting a ‘peanut’ corner in a building will be costly and affects the Kachang Puteh Man’s income.  Moreover, no outside foods are allowed in the cinemas other than those bought from the cinema’s vendors.

However, Kachang Puteh man are vanishing soon, we don’t see them around more than often, even in our country’s Little India these days.  If you happened to see one, do stop by and patronize, as they may fad off soon.  Now you see it, now you don’t…. In times to come, it does not only leave behind a taste of nostalgia but also the shadow behind our Mr Kachang Puteh man.