13) Types of rainbows in the sky

This is the most commonly seen in the sky.  It forms 40 to 42 degrees of anti solar point (an imaginary point opposite to the sun).  If there are smaller reflective droplets, only violet color will be visible.

A secondary rainbow cast outside or next to the primary rainbow.  It appears to be lighter than the primary.  It has a double reflections in the water droplet, also known as Alexanders Dark Band.

This is a special rainbow.  It needs interference of light rays of different wavelengths to be formed.  It appears on the inside of a primary rainbow and it is faint in color.  The faint pastel streaks of color also form outside the secondary rainbow though it is rare.

This rainbow is not form by sunlight but moonlight.  It appears on the Lunar month when the moon is nearly full, form by the light from the surface of the moon, reflecting in tiny droplets that cause the refraction and stream of color eventually.  It usually appears in a white faint bow on the outer rim of the moon.

This particular rainbow is not formed by rain but fog.  This happens when water droplets are too tiny for light to pass through in the same manner as in a normal rainbow.  And when inadequate color dispersion of light takes place, it results in a white band known as white rainbow.

If you like red, go look for Autumn, that Maple Leaf is so ravishing red.

if you like green，just open the windows or go out of the door,  lush grass is waiting for you.

Even if you like black is also true to the original universe, black is so noble and mysterious. 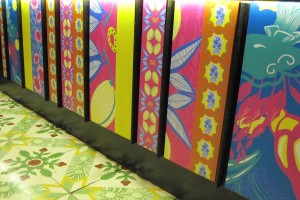 A critical analysis of the American empire's high-minded rhetoric, and the ways in which it continually fails to square with reality.