43) Please drop me a card this Christmas! 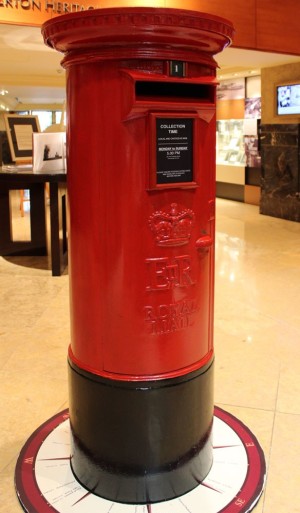 You may be able to spot this pillar post box at the Fullerton Heritage Gallery at The Fullerton Hotel.  But these are the last two left since 1873, which were specially shipped from Great Britain.  These special pillar post boxes feature the EIIR (Elizabeth II Regina) British Royal Cipher on its door as symbol of the ruling monarchy at that time when the pillar post boxes were produced.

In 2001, the Fullerton Hotel has transformed himself from a General Post Office to a super star Hotel.  It was during that time that the post box was preserved as his iconic memories!

The other pillar post box is still serving the public outside Singapore Philatelic Museum.  It stands in front of the museum welcoming people from all over the world.

And this handsome guy in the Fullerton Hotel, is gladly asking if you would like to drop him a card this Christmas! 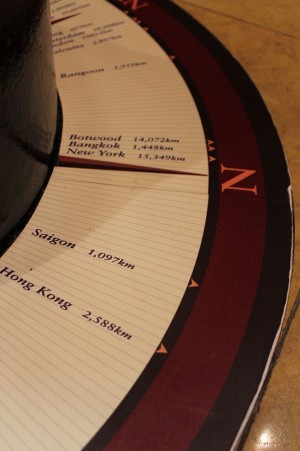 This FLOOR COMPASS shows you the direction to your destination.

Whether you are going Hong Kong or Saigon, it takes you over thousands of kilometers from this direction

Or you want the distant Cairo or the nearby Penang?

My home Sydney or neighbor Auckland?